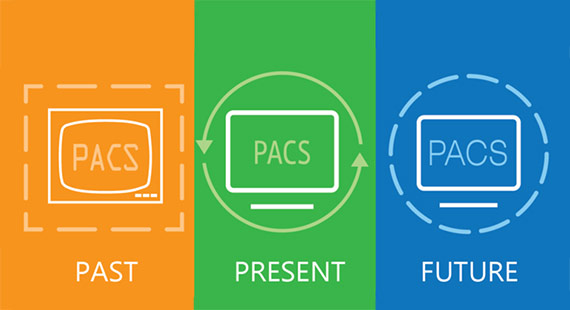 A Brief History of the PACS: Past, Present, & Future

It’s difficult to pinpoint when the idea of a PACS was first introduced to the medical world and the history of radiology. Some place its inception in 1979, as the brainchild of Professor Heinz Lemke from the Technical University of Berlin; while others credit the first large-scale implementation of PACS in 1982 at the University of Kansas. Regardless of which we decide upon, one thing is certain, the modern PACS is the product of many inputs, innovations, trials, and errors. With that said, here’s a brief history of the PACS and how it has evolved into the powerful radiology software solution it is today.

Past
Initially, the early adopters of PACS weren’t able to communicate or share data with one another. Proprietary protocols and datasets made it difficult if not impossible for an image generated on one vendor’s device to be archived or displayed on the another vendor’s hardware. By the mid-1980s, with the threat of government oversight looming, work had begun on the creation of a standard for both transmitting and storing medical imaging data from and between disparate hardware manufacturers.

This effort was spearheaded by the American College of Radiology (ACR) and National Electrical Manufacturers Association (NEMA). They joined forces in the early 1980s to devise a standard in consultation with some of the industry’s largest players. With some tweaking over the intervening years, a full-fledged standard had been developed by 1993 with the third release of the specification. This specification was then rebranded as DICOM, or Digital Imaging and Communications in Medicine.

Present
Over the last three decades, PACS have subsumed additional responsibilities along the way. To stay competitive many vendors began offering additional services and features typically found elsewhere in the realm of informatics, such as workflow management, reporting, 3D reconstruction, and peer review among others. Through tight integrations with a hospital information system (HIS) and radiology information system (RIS), PACS is able to communicate patient demographics and report findings electronically, further expediting and improving patient care. To learn more about PACS, visit our extensive guide to PACS Radiology Information Systems.

Future
As the needs of healthcare providers expand outside of traditional medical imaging and workflows like those found in radiology and cardiology, IT personnel are looking for more inclusive systems. There’s a need for PACS to be able to manage medical imaging for disciplines, such as dermatology, endoscopy, and pathology, among others. Two such technologies that can consolidate and extend the scope of PACS systems are vendor neutral archives (VNAs) and, to a even greater extent, Imaging EMRs.

VNAs provide a place to store images, documents and other files in a standard format. PACS and other devices enable healthcare providers to access that data using a standard communication interface (i.e. DICOM). Though this move by some vendors towards vendor neutral archives has proven to not completely supplant PACS (as there’s still a need for a universal viewer, workflow engine, reporting tools, and other services), the healthcare industry has moved away from PACS-centric solutions in recent years.

Imaging EMRs are essential for radiology practices. They are designed specifically to combine formally separate systems (EMR/EHRs, RIS, HIS, PACS, VNAs) into one system that will sit in the center of a healthcare organization or ecosystem providing instant access to medical data to patients and providers.

Since the inception of meaningful use and the advent of EHRs, Imaging EMRs follow the necessary guidelines outlining the nature of the transmission of clinical patient data between healthcare providers, insurers, and patients. In this way, patient autonomy is assured, and democratized healthcare is fostered.

Questions About Going Beyond Your PACS?

The future of faster, empowered care is here — reach out to our team of experts today to explore how RamSoft’s innovative medical imaging SaaS solutions like OmegaAI can revolutionize your healthcare ecosystem!

This website uses cookies to improve your experience while you navigate through the website. Out of these cookies, the cookies that are categorized as necessary are stored on your browser as they are essential for the working of basic functionalities of the website. We also use third-party cookies that help us analyze and understand how you use this website. These cookies will be stored in your browser only with your consent. You also have the option to opt-out of these cookies. But opting out of some of these cookies may have an effect on your browsing experience. For more information about how we use your data and how we use cookies, please see our Privacy Policy.
Necessary Sempre habilitado
Necessary cookies are absolutely essential for the website to function properly. This category only includes cookies that ensures basic functionalities and security features of the website. These cookies do not store any personal information.
Functional
Functional cookies help to perform certain functionalities like sharing the content of the website on social media platforms, collect feedbacks, and other third-party features.
Performance
Performance cookies are used to understand and analyze the key performance indexes of the website which helps in delivering a better user experience for the visitors.
Analytics
Analytical cookies are used to understand how visitors interact with the website. These cookies help provide information on metrics the number of visitors, bounce rate, traffic source, etc.
Advertisement
Advertisement cookies are used to provide visitors with relevant ads and marketing campaigns. These cookies track visitors across websites and collect information to provide customized ads.
Others
Other uncategorized cookies are those that are being analyzed and have not been classified into a category as yet.
Salvar e aceitar
Distribuído por